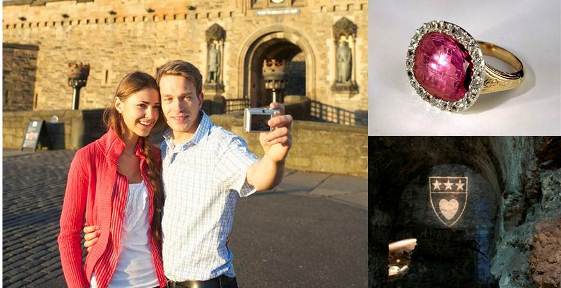 Last year we had the pleasure in producing a brand new Official Souvenir Guide for Edinburgh Castle, featuring new text, new images and a completely revamped design. You may have already spotted it in our shops! Recent research has thrown up a host of new stories about the castle. Here are ten of the more intriguing ones (sadly not all of them made it into the book).

Some of the world’s earliest photographs were taken at Edinburgh Castle. Robert Adamson and David Octavius Hill, based in Edinburgh, were among the pioneers of the new technology. They visited the castle in the 1840s and took numerous shots of soldiers of the garrison.

Of course the castle remains a very popular backdrop for photographers today!

Would you credit it?

When Bonnie Prince Charlie’s Jacobite army was advancing on Edinburgh in September 1745, the anti-Jacobite Royal Bank of Scotland prudently removed all its gold coins to the safety of the castle. On arrival, the illustrious prince visited the bank. He presented a banknote which, like modern banknotes, carried the words, ‘I promise to pay the bearer …’ and demanded gold. The bank was obliged to cough up.

An elephant lived at the castle in the 1830s. It was the mascot of the 78th Highlanders, who brought it back from Ceylon (now Sri Lanka). It led parades through the city and is said to have enjoyed a pint or two of the local beer. Its toenails can still be seen in the National War Museum.

In 1558, the siege cannon Mons Meg was fired from the castle to celebrate the marriage of Mary Queen of Scots to the French dauphin in Paris. The blast was so powerful that it shattered the windows of nearby buildings.

Of the many people who defended the castle, perhaps the most desperate was Guy, Comte de Namur, an ally of Edward III of England. In August 1355 he got lost in Scotland and fled to Edinburgh with a small troop of knights and men-at-arms. On arrival, he found that the castle’s defences had been destroyed (in 1314, on the orders of Robert the Bruce). He and his men had to kill their horses and use them as cover. When the Scots discovered he was French and not English they set him free.

Also in 1558, several people reported sighting a dragon at the top of David’s Tower, then the most prominent building at the castle. In a Catholic country on the brink of Protestant Reformation this was interpreted as a bad omen, possibly relating to the Catholic Mary Queen of Scots.

David’s Tower was destroyed during the Land Siege of 1571-3, but chambers under the half moon battery, originally part of the David’s Tower, can be visited.

In 1939, a German bomber was downed near Edinburgh. Its injured aircrew were brought to the hospital at Edinburgh Castle (now part of the National War Museum). In the spirit of fair play, the British airmen who had shot them down paid them a visit.

In 1497, Mons Meg was hauled from Edinburgh Castle to Northumberland by James IV, in a bid to capture Norham Castle from the English. She was draped in a handsome cloth decorated by James’s court painter Sir Thomas Galbraith. Five years later he landed an even more prestigious commission: to draw up the Treaty of Perpetual Peace between Scotland and England. The ‘perpetual’ peace would last 10 years.

In 1988, archaeologists made a macabre discovery, close to Crown Square at the top of the castle. It was a pit filled with the skeletons of 25 or more dogs. They had all been killed at the same time, in the early to mid-1600s. They had not been butchered for food, so were probably killed to prevent the spread of disease.

The Stewart Jewels are displayed in the Crown Room, close to the Honours of Scotland, and have their own fascinating story to tell. Owned by the Jacobite claimants to the throne, they were eventually inherited by Henry, Cardinal of York, younger brother of Bonnie Prince Charlie. He wound up penniless in Venice, but held onto the jewels. George III, the focus of Jacobite dissent, sent money to assist the cardinal and when he died he left the jewels to the king. This exchange signalled an end to the long-running dispute between the Hanoverian monarchy and their Jacobite rivals.