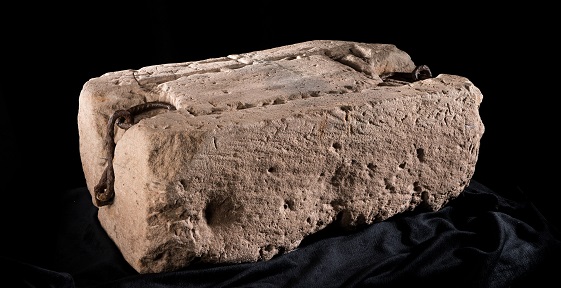 To mark the 20th anniversary of the Stone of Destiny’s return to Scotland, our colleagues in the Historic Environment Scotland Collections team have pulled together a wee list of facts and figures you may not already know.

Helping us with the facts for today’s blog is Richard Welander our Head of Collections.  Richard was among those involved in the Stone of Destiny’s return operation, 20 years ago.  Richard along with six other members of staff formed a core task group. He also held a hands-on role at Westminster Abbey during the Stone’s removal in November 1996. Richard says:

“The Stone of Destiny is truly unique. There is no other object quite like it that continues to captivate and intrigue audiences in equal measure – even twenty years on since its return.

“Now helping to mark this anniversary, these lesser known facts offer an insight into the Stone of Destiny, its history and significance, whilst newly released information helps shed a light on some of the behind the scenes processes which were involved in its return in 1996.”

The Stone of Destiny forms part of the Honours of Scotland Exhibition at Edinburgh Castle. St Andrews Day – Wednesday 30th November – is the 20th anniversary of the Stone’s return to Scotland.

Read on for some fascinating facts on the story of the Stone, and have a very Happy St Andrew’s Day!