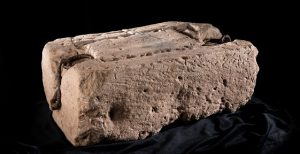 Stone of Destiny also known as the Stone of Scone, and often referred to in England as The Coronation Stone. Oblong block of red sandstone that was used for centuries in the coronation of the monarchs of Scotland, and later the monarchs of England and the Kingdom of Great Britain. Historically, the artefact was kept at the now ruined Scone Abbey in Scone, near Perth, Scotland. About 26 inches (660mm) by 16.75 inches (425mm) by 10.5 inches (270mm) and its weight approximately 336 pounds (152 kg). Currently kept and displayed in Edinburgh Castle, Edinburgh