An Old Castle Through Young Eyes 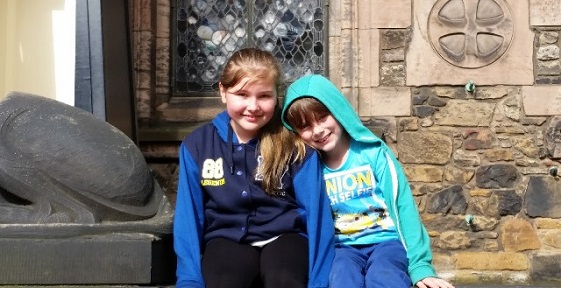 My brother Zak and I have been learning about Scottish history at school, so our Mum decided to help bring it to life with a trip to Edinburgh Castle.

It’s amazing what you can learn while you eat!

When we got there we decided to stop for lunch first, mostly because I was hungry! Whilst we were there we saw some writing on the café wall and it said something about the ‘war or battle’ of Waterloo. Me and my little brother started laughing so hard just because of the funny name. After lunch we set off to explore the castle and its history and we decided to start at the top. On the way up we seen some rocks that my Mum said were lava from the volcano which Edinburgh Castle was built on top of!

At the top of the hill, the first place we visited was St.Margaret’s Chapel, which is the oldest building in Edinburgh. It was lovely inside and I thought the altar looked beautiful. On the way out of St.Margaret’s Chapel we saw the war memorial garden – it looked very peaceful.

The Great Hall, armour and weapons

We then walked round to Crown Square. We went into The Great Hall and there was real weapons that they used in real battles A LONGGGG TIME AGO…! I also saw an ENORMOUS painting on the wall of a guy with sideburns that looks like Rabbie (Robert) Burns. [The painting is of Sergeant Charles Ewart]

The Great Hall. Remember to look up!

Afterwards, we went into one of the gift shops and I was trying on old fashioned masks that ladies used to wear for masked balls. They were really colourful!

In the Crown Gift Shop

We visited the Royal Palace next, and that was where we met Laura, one of the castle guides. She showed us a painting of Charles II and she pointed out the illusion on his very weird looking shoe. My brother, my mum and I were surprised but we thought it was really cool at the same time – we were amazed actually! While we were there Laura also told us some really interesting facts about the history of the rooms we were in at the time. She made history sound really interesting.

We moved on to the Prisons of War, which was probably my favourite part! It stunk on the way in though ..but my mum couldn’t smell a thing. Me and my brother were looking for rats and we found one… but it was a fake – at least my brother found his twin though.

After spending more than three hours at the castle, it was time to head home. We were exhausted and we still hadn’t seen everything. I think that means we’ll just have to pay another visit to the past… Rebekka, aged 11.

Take your little explorers to the castle over the October holidays and let them experience all it has to offer. Don’t forget to pick up their copy of the Edinburgh Castle Young Visitors Guidebook before you visit. Available in our Portcullis Shop and online.