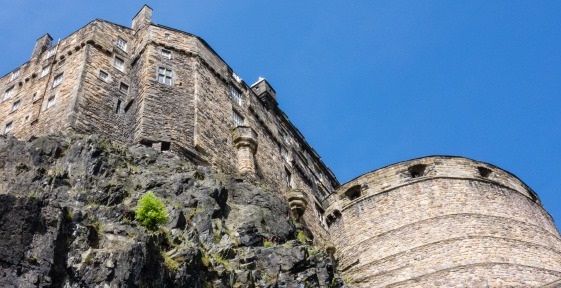 David II is responsible for building the once mighty David’s Tower. The tower was the heart of the castle in the late 1300s and originally stood over 30m (100ft) high.

This was the royal residence at Edinburgh Castle for almost 100 years, where kings could welcome foreign diplomats in grand surroundings. David II had spent years in England and France, living in fine stone towers. On his return he was intent on creating his own statement in stone as a reflection of his power and kingship.

The structure took nine years to build and wasn’t complete when David died in 1371. By the early 1500s, David’s Tower had been eclipsed as a royal residence by the Royal Palace. But in troubled times, it was still an important defensive structure.

Chambers under the half moon battery, originally part of David’s Tower

Part of the basement and principal floors survive, and these atmospheric ruins can be accessed today by a stair at the back of the Half-Moon Battery – make sure you put it on your itinerary before your visit!
You can also look out for the coat of arms of King David II in one of the stained glass windows in the Great Hall.