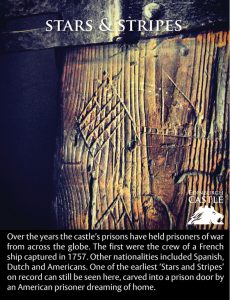 Over the years the castle’s prisons have held prisoners of war from across the globe. The first were the crew of a French ship captured in 1757. Other nationalities included Spanish, Dutch and Americans. One of the earliest ‘Stars and Stripes’ on record can still be seen here, carved into a prison door byan American prisoner dreaming of home.