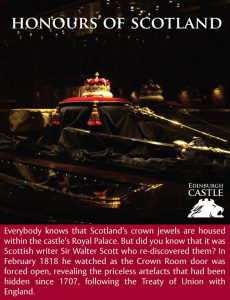 Everybody knows that Scotland’s crown jewels are housed within the castle’s Royal Palace. But did you know that it was Scottish writer Sir Walter Scott who re-discovered them? In February 1818 he watched as the Crown Room door was forced open, revealing the priceless artefacts that had been hidden since 1707, following the Treaty of Union with England.