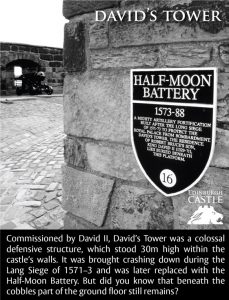 Commissioned by David II, the self-named David’s Tower was a colossal defensive structure, which stood 30m high within the castle’s walls. It was brought crashingdown during the Lang Siege of 1571–3 and was later replaced with the Half-Moon Battery. But did you know that beneath the cobbles part the ground floor still remains?