From Fortress to Tourist Attraction

Edinburgh Castle has dominated the skyline of the city for centuries. Its foreboding defenses had one main function: to keep people out. But this was all to change on the 26 May 1819 when it was decided to let people in! We recently spoke with Donal Ferrie, one of the castle guides to tell us about the history of tourism at the castle.

Lifting the lid on the Honours of Scotland

A year previously, on February 4 1818, Sir Walter Scott had sought the permission of the Prince Regent to search for the Crown Jewels in Edinburgh Castle. He entered the bricked-up Crown Room where he came upon a massive chest. This was broken open to reveal the Crown, the Sword, the Sceptre and a Wand. 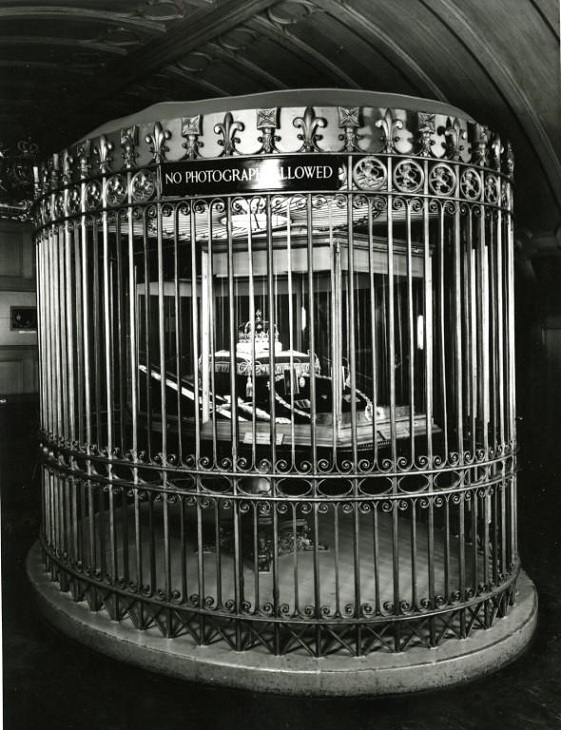 The original display case for the Crown Jewels.

There were only 150 people allowed in per day, a far cry from the numbers entering the castle today. It cost 1 shilling for entry and the only way to get a ticket was to write to Robert Cameron, Stationers at Number 2 Bank Street. 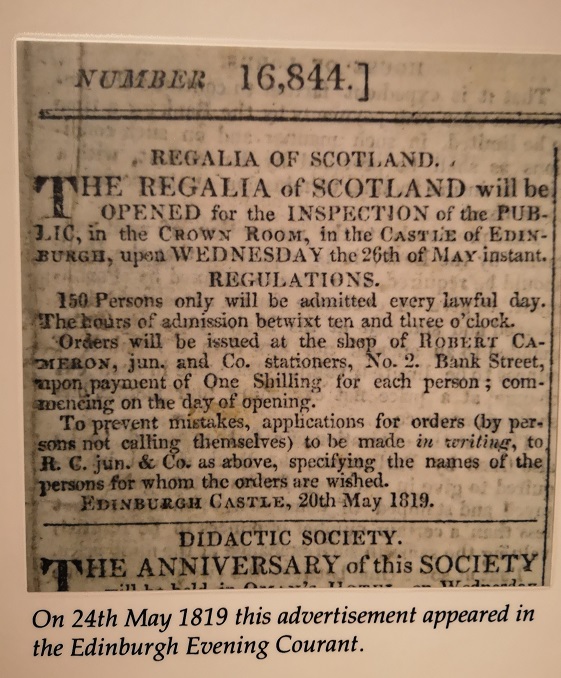 A newspaper cutting from the Edinburgh Courant explains how to book your tickets.

The Great Hall was in use as a military hospital – after serving as a barracks since the 1650s. The Queen Anne Building provided accommodation for officers and gunners, and the War Memorial was another barracks block known as the North Barracks. St Margaret’s Chapel was at this time being used as a gun store and the vaults below Crown Square still housed prisoners from the Napoleonic War with the last Prisoners leaving in 1821. The Royal Apartments were Mess quarters for the Army, which included a bar.

Over the years following 1819, more buildings opened to the public. St Margaret’s Chapel was the first of these after its original use was rediscovered in 1845. Antiquarian David Wilson uncovered the purpose of the building and he set about restoring it to what we see today. The stained glass was added in 1922 by Douglas Strachan.

In 1861 a feature was added that to this very day is a massive draw for tourists. The One O’Clock Gun had arrived! Initially the Time Ball had been set up on Calton Hill in 1852. This would drop at 1pm so the sailors in the Port of Leith to set their chronometers in order to navigate accurately at sea. As Edinburgh is not known for its fantastic weather, an audio signal was added in 1861 so sailors could hear the time signal if not see it.

A few decades later, there was major renovation work being planned to make the castle appear more ‘medieval’.  The changes included the building of the Argyle Tower above the Portcullis Gate and the complete restoration of the Great Hall. The Edinburgh architect Hippolyte Blanc was tasked with renovation of the Hall. His vision was for the Great Hall to be restored as a medieval hall and this was completed in 1891. However, there was disagreement with the Army and he refused to hand over the keys. It was eventually opened in October of 1892. 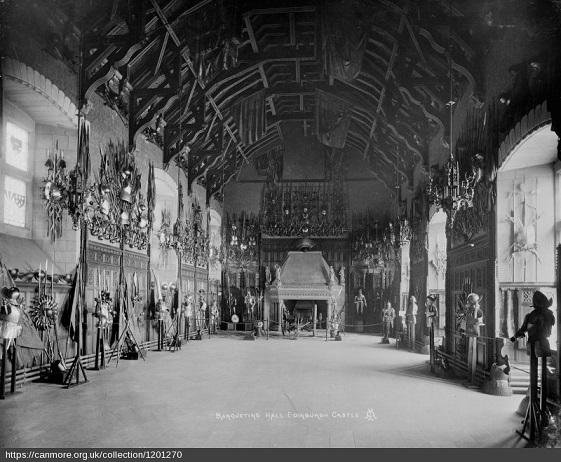 A few decades later, there was major renovation work being planned to make the castle appear more ‘medieval’. The kinds of additions and alterations that were made would bring history-lovers out in a cold sweat today! However, they were done with the best of intentions. The work was informed by research and advice by leading historians and scholars of the time, and Hippolyte Blanc was a respected architect. Now our focus is on conserving the castle. Ideally we want to keep it in the condition it came down to us, for future generations to enjoy.

At this time there was still no general admission to the castle and a ticket had to be purchased for each building. 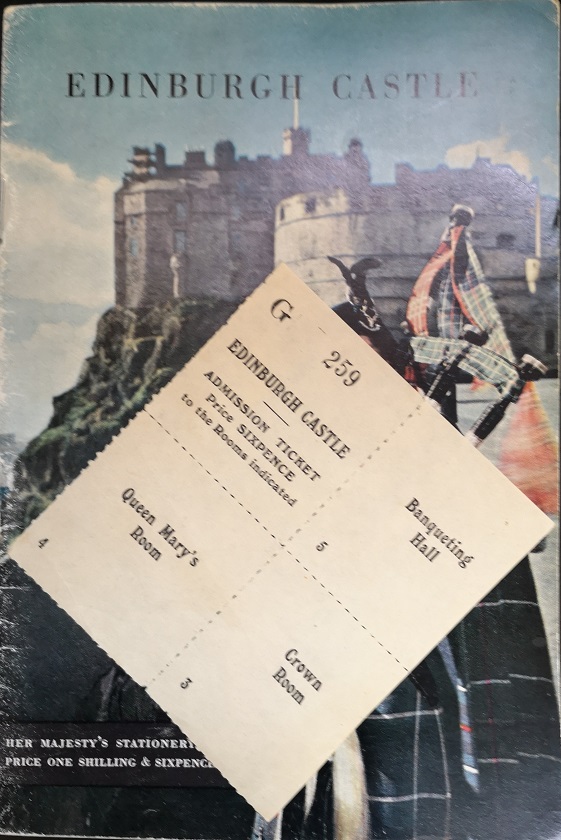 Edinburgh Castle guidebook and ticket from around 1960.

It wasn’t until the 1980s that the ticketing system was simplified and one ticket granted you access to all the public buildings.

To this day the Crown Jewels are still the most popular attractions, but also our recent permanent Exhibition ‘Fight for the Castle‘, which takes visitors on a journey back to The Wars of Independence. Over the years we have hosted many fantastic musical events, including the Edinburgh Military Tattoo that still wows audiences 69 years on. Edinburgh Castle has come a long way from when it started admitting tourists, from 150 a day to 2.1 million a year!

If you will be visiting us soon, be sure to share your photos using #EdinburghCastle