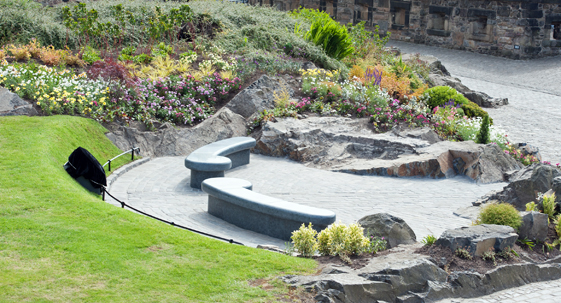 Last weekend’s Drumhead Service at the castle was a very poignant occasion and one of many events planned across the year to mark the centenary of  the First World War.  At Edinburgh Castle, those lost in battle and those still serving today are never far from our thoughts.

The Scottish National War Memorial at Edinburgh Castle, designed by the renowned Scottish Architect Sir Robert Lorimer, was originally opened by The Prince of Wales on 14th July 1927. The opening ceremony was attended by King George V and Queen Mary, who gifted the magnificent Shrine Casket to the people of Scotland. The Casket contains the names of all Scottish service personnel who fell during The Great War. Additions from subsequent conflicts are contained in the Rolls of Honour.

To mark the sacrifice and centenary of The Great War, the Trustees of The Scottish National War Memorial and Historic Scotland have been working collaboratively over the past 12 months  to develop and implement a scheme to form a new area for contemplation, within the existing Memorial Gardens. This new garden area was officially opened by Her Majesty The Queen on 3rd July 2014, following the 87th Annual Commemoration Service, which included the laying-up of the Regimental Colours of The Highlanders.

Elements of the design, such as enhanced visitor access to the garden; primary prominence and use of the natural rock out-crops, and detailing of the curved, polished Scottish stone bench seats were inspired by Lorimer’s initial conceptual sketches. A section of the existing lawn was reduced by approximately 1 metre to create a sense of enclosure and connection with the site.

The plaque plinth and  benches were made by Tradstocks Ltd, using whinstone quarried at Denny, by Stirling. The re-used whinstone paving setts, were reclaimed from the castle and Holyrood. All the stonework used in the construction is similar to the basalt of Castle Rock.

Edinburgh Castle and the National War Museum have also planned a programme of activities in the coming months including a roll of honour presentation showing on a screen in Visitor Information. This will consist of photographs, quotes, poetry and a selection of names of fallen soldiers taken from the Scottish National War Memorial. The names will be changed on a monthly basis.

The castle will host various First World War themed re-enactments including Military Hospital in Edinburgh, The Great War and Their Name Liveth. The National War Museum will hold a Next of Kin exhibition until March 2015.