Shoring Up the Defences 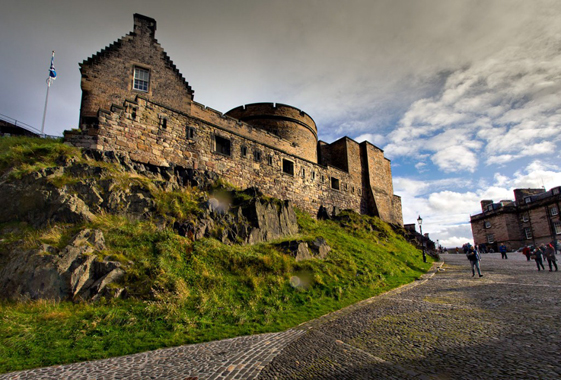 At this time of year, Edinburgh Castle traditionally gets a bit of a make-over as our works team and contractors carry out essential repairs in preparation for another busy summer season to come. This got us wondering about the massive amount of work that has gone on over the centuries to create the mighty stronghold that watches over the city today…

In its early years Edinburgh Castle was mainly confined to the rock’s summit, built largely of timber. Only the tiny St Margaret’s Chapel (which stands to this day) and the larger St Mary’s Church are known to have been built of stone.

It is likely that most of the castle’s buildings and defences were rebuilt in stone in the 13th century, but these walls were still not strong enough to withstand the armed might of Edward I’s invasion in early 1296.  The English captured and held the castle for the next 18 years until Robert the Bruce’s daring recapture. He ordered his troops to dismantle the castle, rendering it unusable. The once-great fortress lay in ruins for the next 20 years.

Bruce’s son David II took it upon himself to rebuild the castle his father had ‘cast doun’, adding David’s Tower. With his death came the age of the Royal Stewarts, during which time, Edinburgh Castle reached the pinnacle of its importance as Scotland’s principal royal castle.  James III made the castle his permanent home, re-planning the royal residence around a new central courtyard, Crown Square. His son, James IV, went on to build the Great Hall.

In the summer of 1571 the ‘Lang Siege’ began. By the end, David’s Tower was abandoned and the Half-Moon Battery you see today was built around its ruins. The Portcullis Gate was also built to replace the Constable’s Tower. The badly damaged Royal Palace lay unused by royalty for 42 years, until James VI ordered its reconstruction, prior to his ‘hamecoming’ in 1617. A fitting tribute to celebrate his 50th anniversary as King of Scots.

1649 brought Oliver Cromwell to Scotland. By Christmas Day 1650, the Lord Protector of England had captured the castle.The royal castle now began to take on the appearance of a garrison fortress. Important medieval buildings were demolished, including the Royal Gunhouse, Mons Meg’s old lair and St Mary’s Chapel Royal.

As the years passed, more grandiose schemes were proposed for the castle, including a new Gatehouse at the main entrance in 1888 and the restoration of the Great Hall in 1891, in an attempt to make the landmark look more like a ‘real castle’.

In 1905 the castle was given a new role as a visitor attraction, a role that remains to this day. Each year smaller works, like the lighting of the honours exhibition and restoration of the birthing room, are carried out to ensure that the culture and history of Edinburgh Castle can be enjoyed by thousands of visitors each year.