The Origins of the One O’clock Gun 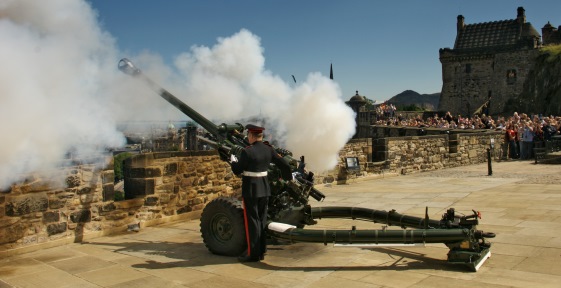 Many visitors to Edinburgh Castle look forward to seeing one of our highlights. It fires at one o’clock from Mills Mount every day, except Sundays, Good Friday and Christmas Day. It is, of course, the One O’clock Gun.

The One O’clock Gun is one of only a few surviving time signals, once  a common feature of ports around the United Kingdom. Its sound was intended to replicate a visual time signal, given by a falling ‘time ball’ on the top of Nelson’s Column on Carlton Hill, which was installed in 1852 . The precise timing of the ball’s fall allowed ships’ captains to set their chronometers accurately. This enabled them to calculate longitude, and so to determine the shortest route at sea, saving them time and money.

The One O’Clock Gun

This time ball is still dropped at precisely one o’clock every day, continuing to give a visual signal to ships in Leith Harbour – a sign for captains to set their chronometers by. The gun fires in support – the two signals now a familiar feature of Edinburgh life.

The Time Ball at Nelson’s Column

Sound travels relatively slowly, at about 340m (1,125ft) per second. The bang of the One o’Clock Gun therefore takes about 10 seconds to reach the ports of Leith and Newhaven, and longer to reach vessels out at sea. Navigators had to factor this into their calculations.

The One O’clock Gun was first fired (after two failed attempts) on 7 June 1861 from Edinburgh Castle’s Half Moon Battery. It was an 18-pounder field cannon, of the type now visible around the castle’s battlements. Various other types of gun were used until 2001, when the present 105mm field gun was introduced.

If you are visiting soon, be sure to watch how accurately the gun is fired – you will certainly be able to set your watch by it! Admission tickets to the castle can be bought in advance on our website!