The Return of A King: George IV Visits Edinburgh

Two hundred years ago, on 15 August 1822, King George IV made his way to Scotland, landing in the port of Leith.  There were various reasons for his visit.

A Radical Revolt had taken place in Scotland in 1820 and it was felt a visit by the Monarch might calm things down. The Honours of Scotland had been “rediscovered” in 1818 and were put on display in Edinburgh Castle in 1819. This presented a perfect opportunity for the Monarch to come and inspect his Regalia. In fact it was George IV, as Prince Regent, who gave permission for Sir Walter Scott to search for the Jewels four years earlier. 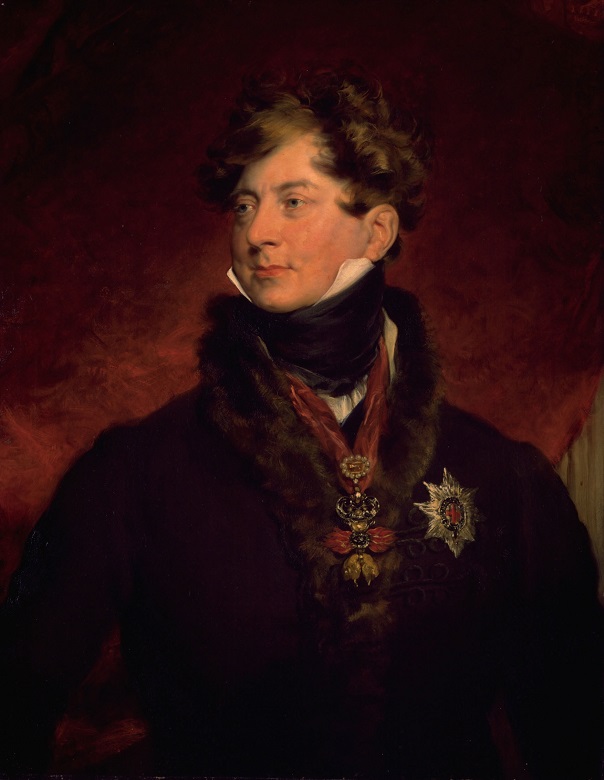 The importance of this visit can’t be overstated. It was the first time that Scotland had a visit from a reigning monarch since 1650 when Charles II stayed in Holyrood Palace. It was also the first visit Edinburgh Castle had since Charles I in 1633, who stayed in the Castle before his Scottish Coronation.

After his work with the Honours, Sir Walter Scott now took it upon himself to put on a pageant for the visit of George IV. This all started on 15 August with the king’s arrival at Leith. A lucky few were allowed into a VIP area on to the pier to watch the king land, while huge crowds looked on from bridges, buildings and other vantage points.

From Leith, the king travelled up Leith Walk to the acclaim of a large crowd. On reaching Picardy Place at the top of Leith Walk he received the keys of the city. The king then made his way to Holyrood Palace. 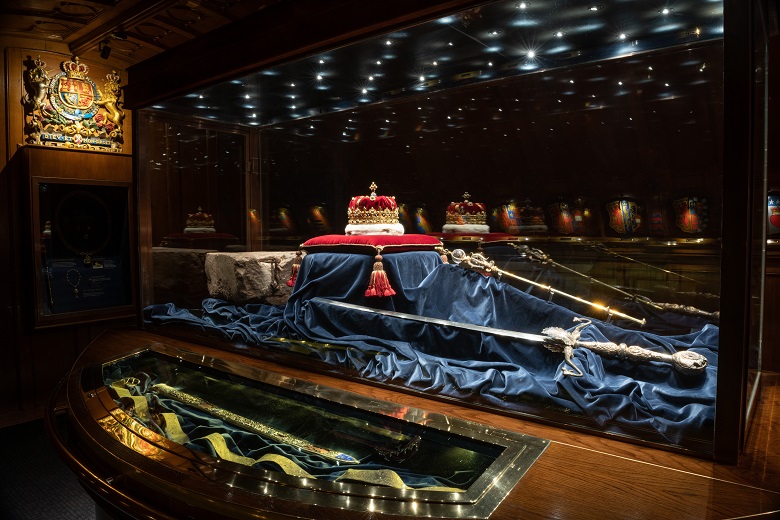 The Honours of Scotland in the Crown Room at the castle

On 12 August pomp and pageantry began with a procession making its way to Edinburgh Castle from the Mound to collect the Honours of Scotland. King George was still at sea at this point, making his way up the east coast.

Walter Scott and others halted underneath the imposing sight of the Halfmoon Battery and knocked on the gate of the castle. Upon being asked who was there, an eyewitness reported the reply as

The King’s Knight Marischal comes to receive the Regalia, which are deposited within your castle, and demands admission in the name of the King”

Throw open the gates, and make way for the Kings Knight Marischal”

After collecting the Honours, they were escorted to the Palace of Holyroodhouse to await the arrival of the king three days later. 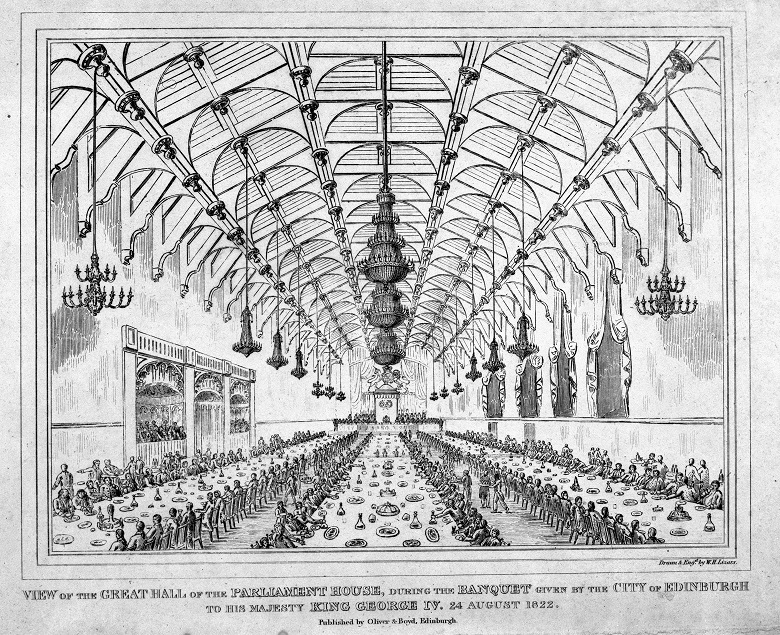 Drawing by W H Lizars shows Parliament Hall during a banquet for George IV on 24 August 1822. (© Courtesy of HES)

Also in attendance was the Royal Company of Archers. They acted as the king’s bodyguard, something that continues to this day when the Monarch arrives in the capital.

George IV did not stay in Edinburgh on his first night. He stayed at Dalkeith House as a guest of the Duke of Buccleuch. On the night of the 15th Edinburgh would have been a noisy place. There was canon fire from the castle as well as Calton Hill, Salisbury Crags, Leith Battery and from the ships in the Forth. A fire was lit on Arthur’s Seat and beacons illuminated on the castle ramparts.

The King at the Castle 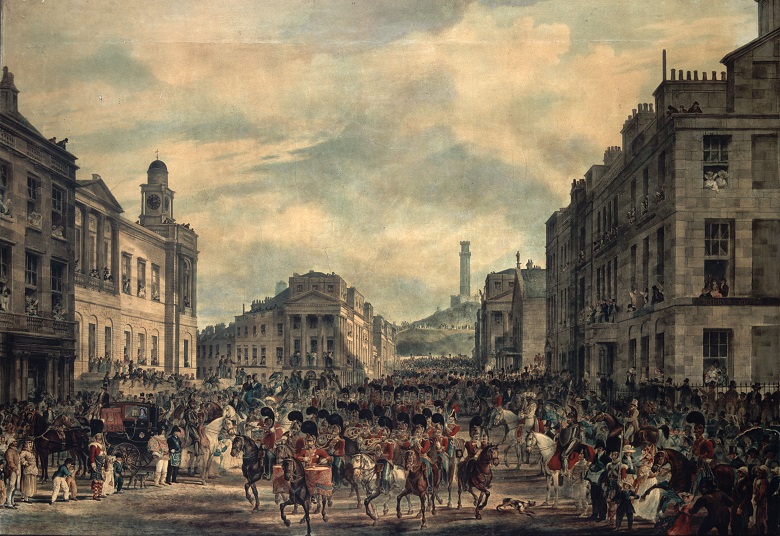 On 22 August George IV made his way from Holyrood to Edinburgh Castle. It was a damp miserable day, so not out of place for this time of year!

The procession set off shortly after 2pm as the rain started to get heavier. Despite this the crowds were very exuberant all the way up. The king’s carriage stopped at the Netherbow which marked where the walls of Edinburgh used to stand. Eventually the King made his way to the castle gates, where he was welcomed by Lieutenant-Governor Robert Abercromby.

The king alighted his carriage by the inner barrier and the Lieutenant-Governor offered him the keys. The king made his way through the inner barrier to the Portcullis Gate where he was unable to travel any further. At this point, the mobility vehicle (Horse and Carriage) was on hand. It took him past the Argyle Battery, Governor’s House through Foog’s Gate and up to the Halfmoon Battery. 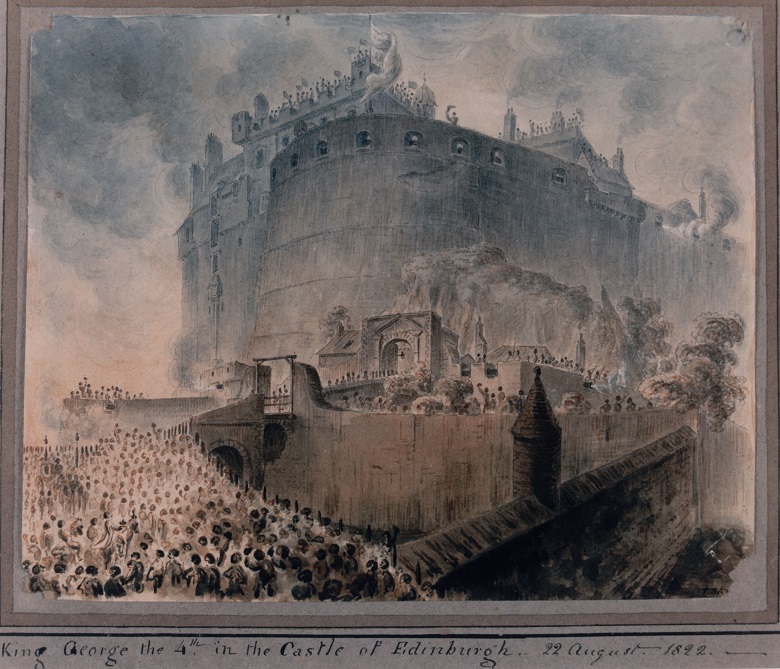 A platform had been built on the Halfmoon Battery akin to that which is there now for the Edinburgh Military Tattoo. George waved his hat to cheering crowds and allegedly said

Good God! what a fine sight”

Next, the king was escorted to the Governor’s House where he could dry out and warm up. He drank a glass of wine, toasting the officers in his company and the governor before returning to Dalkeith House via the Palace of Holyroodhouse.

The Honours which had left the Castle on 12 August returned to the Crown Room on 24 August where they remain to this day.

The king stayed in Edinburgh for another week attending different events. His visit culminated in a visit to Hopetoun House in South Queensferry on 29 August before sailing south once more.

Edinburgh didn’t have to wait 171 years until the next royal visit. Twenty years later in 1842, George’s niece Queen Victoria visited Edinburgh Castle on her first visit to Scotland.