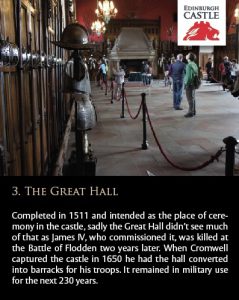 Completed in 1511 and intended as the place of ceremony in the castle, sadly the Great Hall didn’t see much of that as James IV, who commissioned it, was killed at the Battle of Flodden two years later. When Cromwell captured the castle in 1650 he had the hall converted into barracks for his troops. It remained in military use for the next 230 years.