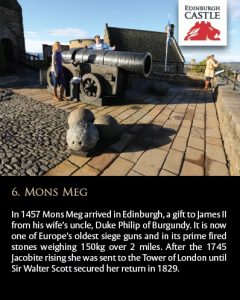 In 1457 Mons Meg arrived in Edinburgh, a gift to James II from his wife’s uncle, Duke Philip of Burgundy. It is now one of Europe’s oldest siege guns and in its prime fired stones weighing 150kg over 2 miles. After the 1745 Jacobite rising she was sent to the Tower of London until Sir Walter Scott secured her return in 1829.