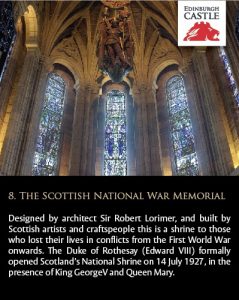 Designed by architect Sir Robert Lorimer, and built by Scottish artists and craftspeople this is a shrine to those who lost their lives in conflicts from the First World War onwards. The Duke of Rothesay (Edward VIII) formally opened Scotland’s National Shrine on 14 July 1927, in the presence of King GeorgeV and Queen Mary.